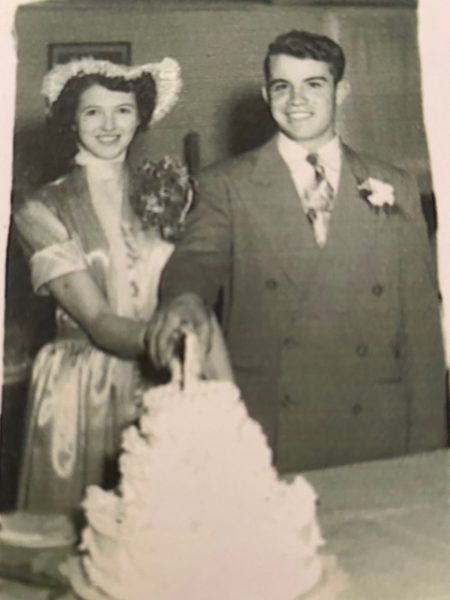 “This will be the first anniversary we have ever spent apart,” said Joan.

Joan and Don have been married for 70 beautiful years, but due to social distancing during the pandemic, they are forced to be apart for their upcoming milestone anniversary on April 16th.  Don is a resident at Oak Manor Healthcare and Rehabilitation Center in Largo, while Joan is at another local retirement community.

Joan was a regular visitor at Oak Manor, driving over to spend time with her husband, but with the unforeseen pandemic and strict regulations enforced at senior living communities, Joan’s visits were suddenly put to a halt.

As she endures the wait to see him again one day soon, Joan shares memories of their wedding day; their seven-dollar-wedding day.

“The seven-dollar wedding, at least that’s what I called it,” said Joan. “I bought blue satin for my wedding dress ($4), and paid a lady $3 to make it. One of the ladies who worked with me, her husband was a baker and baked our wedding cake for, you guessed it, $7, and my wedding band cost $7.”

With FaceTime calls coordinated by the activities team at Oak Manor, Joan and Don connect regularly, and their love is displayed publicly on Facebook after a photo was posted of Don holding a sign that read, “Joan and Girl, I love and miss you all. God is good every day.” Joan, being savvy with her iPhone, commented on the post: “Love you too Don. Since we both are on lock-down, hope to get back to seeing you on Tuesdays and Thursdays again ASAP. Your wife of soon-to-be 70 years.”

With the extension of social distancing guidelines, Joan realized her hope of being reunited with Don on their big day was not possible, but she did have two small requests. One, she commented on the Oak Manor Facebook page: “I sure would like to get a picture side by side for our 70th wedding anniversary.”

Cindy Lewis, Oak Manor Activities Director, sprang into action, taking a photo of Don and collecting a current photo of Joan to merge together for a non-traditional continuation of their tradition. Joan’s other request? A wedding cake topper. She collects one for each milestone anniversary and was having a difficult time getting her hands on one while quarantined. The Oak Manor team ordered one and safely delivered it to Joan as a keepsake.

While Joan and Don’s anniversary tradition may look a bit different this year, one thing is certain, their love was meant to last a lifetime.